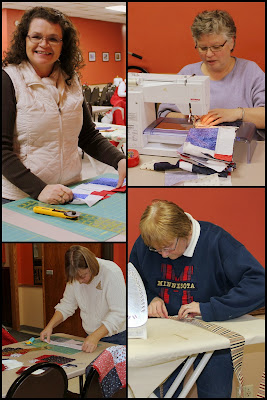 The 30's Mini Group decided instead of having a Holiday Party they would have a Sew Day for "Quilts of Valor".  Making a quilt using the pattern "Disappearing Nine Patch."﻿ 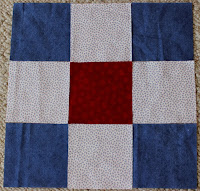 They started by making a nine patch block with 5" squares. Each 9 patch was made with a red square in the middle, white squares around it and blue squares in the corners. They stitched the squares together to form a traditional nine patch. Then each block was cut into four equal pieces by cutting through the block vertically and horizontally.
There are many free patterns for this quilt block.  Click here to find one of them. This is from "Popular Patchwork" website.
The phase disappearing nine patch suits the method perfectly, because to make the quilt blocks a simple nine patch block is sliced apart -- it disappears and is replaced by four smaller units. 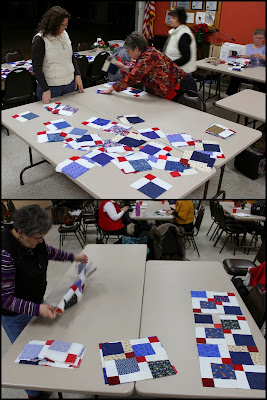 There are a few ways to lay this block out.  This is what the group decided on.
﻿ 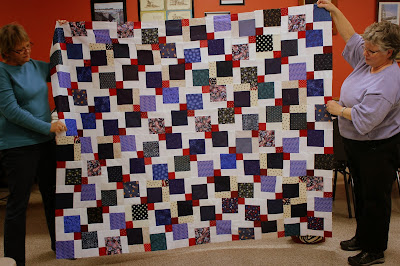 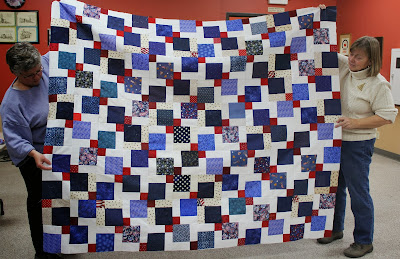 ﻿
Members of this group were asked to make the nine patch blocks at home and bring them to the meeting.  The group of 10 ladies were able to complete 2 quilt tops and 2 more almost completed tops in about 3 hours.  What talented members we have in our guild!